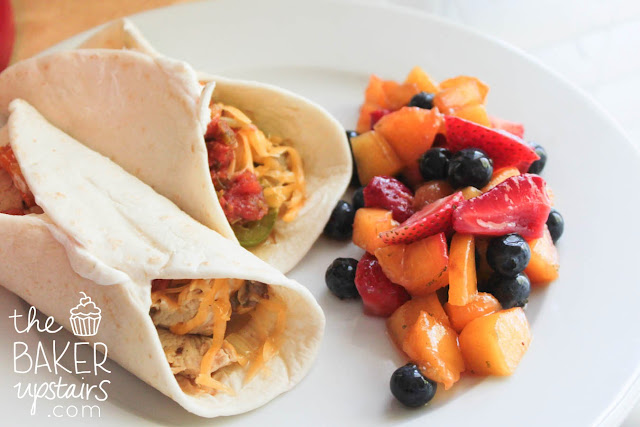 Geoff has this habit of inviting friends over for dinner and then informing me after the fact that I need to cook for extra people. And sometimes it’s hard to figure out what to make using what I have in the house. We had Geoff’s friend Drew over on Sunday to play games, and I was trying to think of something impressive to make using what I already had. I decided to make these delicious chicken fajitas, and they were amazing. Geoff and I reheated them for lunch the next day, too, and they were just as good. We topped them with sour cream, salsa, grated cheese, and olives, and served them in tiny flour tortillas.

As a side dish, I made a quick fruit salad with strawberries, blueberries, and nectarines, then drizzled a little honey on top and added some lime zest. It was super yummy as well!

After marinading, take chicken out of the bag and discard the marinade. Grill or broil the chicken 5-7 minutes per side . Remove from grill or pan and tent with foil to keep warm.

In a large nonstick skillet, heat 1 tablespoon oil over medium heat and add the onion, mushrooms and peppers. Stir fry until softened but still crisp tender. Add soy sauce, water, lime juice and salt and pepper. Cook another 2-3 minutes, stirring frequently. Slice chicken thinly on the diagonal and toss with the vegetables in the skillet. Serve immediately with flour tortillas and top with tomatoes, lettuce, guacamole, cheese, sour cream…the options are endless!