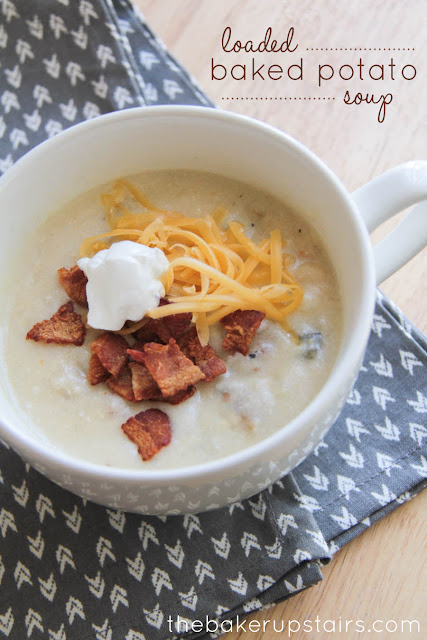 Another day of doomy, gloomy weather outside, another delicious warm soup! (Oh, who am I kidding? I eat soup even when it’s boiling hot outside. It’s just who I am.) I served this loaded baked potato soup at Lizzy’s party alongside the split pea and bacon soup, and it was awesome. I’ve been making this recipe for almost a year, and it’s by far my favorite potato soup recipe that I’ve ever tried. I love how easy it is when you bake the potatoes in the microwave! I threw this together in about twenty minutes before the party started, and it was amazing and delicious. I was in such a hurry that I didn’t even peel the potatoes, and it was still fantastic. In fact, I think I liked it even better with the potato skins! This is a must try recipe!

Microwave potatoes until cooked through (on my microwave, this took about 11 minutes). Remove from the microwave and let sit until cool enough to handle. Cut the potatoes into small chunks, removing skin if desired.

Melt the butter in a large soup pot. Add the flour, and whisk until combined. Cook, whisking constantly, until golden brown, about 2 minutes. Whisk in the milk, chicken broth and the rest of the flour. Cook until thick and bubbling, about 6-8 minutes. Mix in the potato chunks. Whisk in the salt, pepper, and cheddar cheese and stir until the cheese is melted. Remove from the heat, stir in the green onions and sour cream. Serve immediately. Garnish with sour cream, cheddar cheese, green onions and bacon as desired.