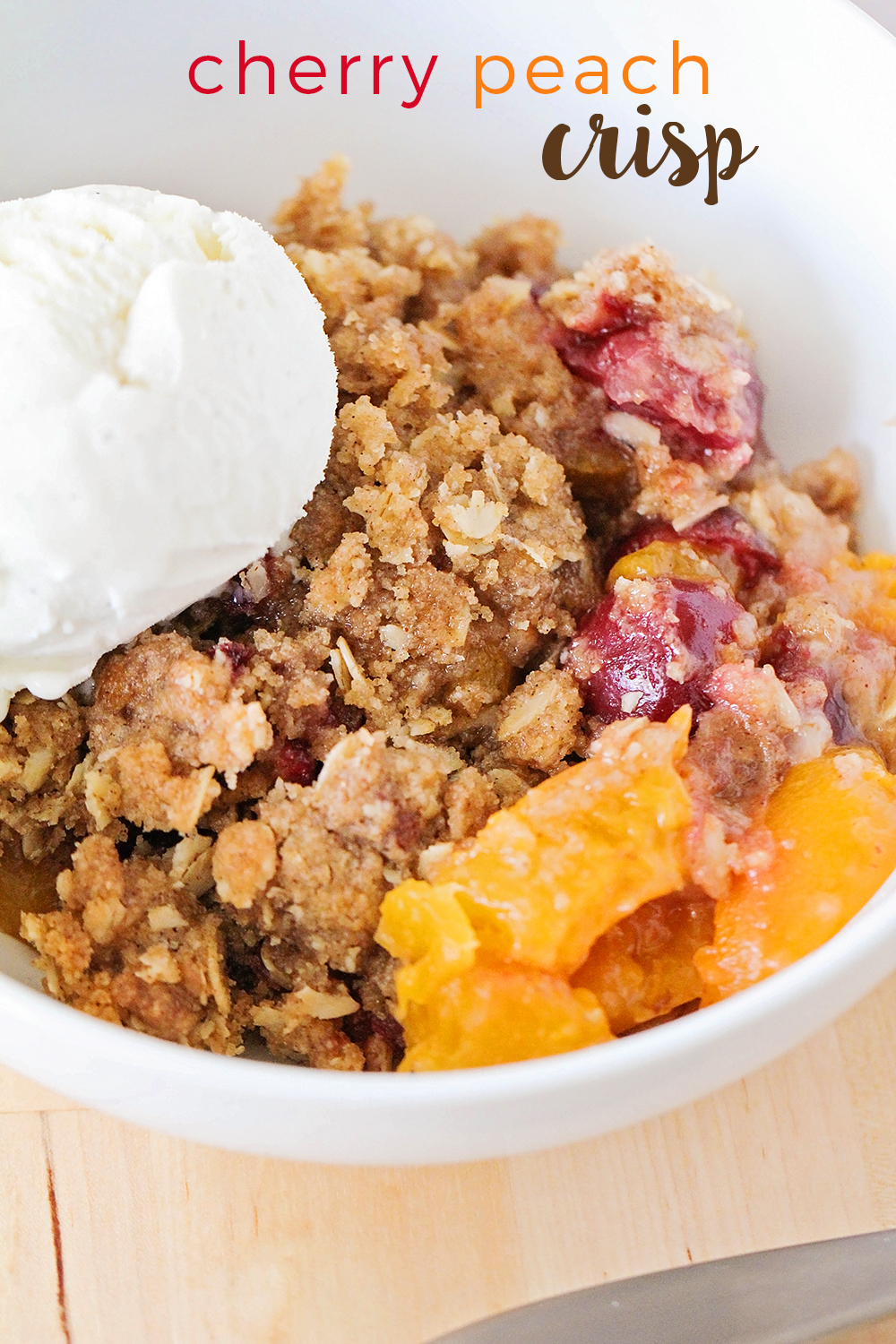 If you’re looking for a fantastic dessert to eat all summer long, this cherry peach crisp is it! It’s full of juicy and tender fruit, topped by a to-die-for crumbly crisp topping, and delicious all the way through.  It is one of the best desserts that I’ve made in a long time (and that’s saying something!).

One of my goals for the summer is to reduce the amount of food waste at our house. We’re usually pretty good about using up leftovers, and not overbuying most things, but when it comes to our produce, things get a little off track. I tend to overbuy fruits and vegetables (and then I often forget what I’ve already bought, and buy more). There is really nothing worse than finding a rotten zucchini in the back of the crisper drawer, or a pound of strawberries all covered in white fuzz. I swear, they multiply in the back of the fridge where I can’t see them! I’m trying to be more intentional in using up all that good produce, especially because we’ve joined a CSA for the summer, and are enjoying visiting our farmer’s market every week. There’s so much delicious fresh produce this time of year that it would be a total shame to throw it out! 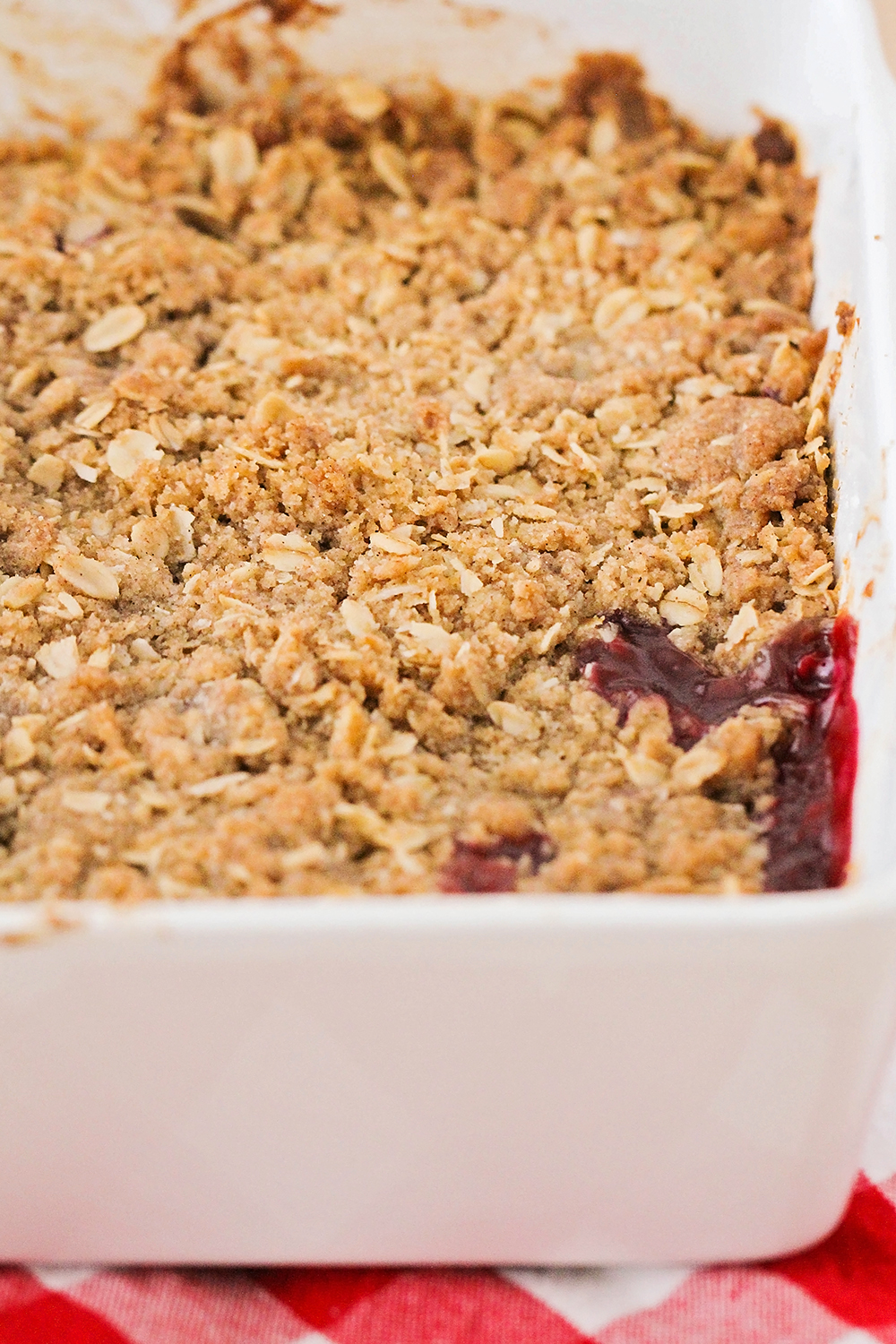 This cherry peach crisp came about because I realized that I had just placed a grocery order for two pounds of fresh cherries, and already had a pound of cherries in the fridge. I had seen this amazing crisp on my best friend Cort’s blog, and just tweaked it a little to use what I had on hand. I pulled out some of my home-canned peaches from the pantry, tossed them with the cherries, and made this amazing dessert! I know there are plenty of other ways I could have used them (like freezing them for smoothies, or making jam), but I’m pretty happy with this crisp. A warm bowl of crisp topped with a cold scoop of ice cream is just plain heavenly, in my book! 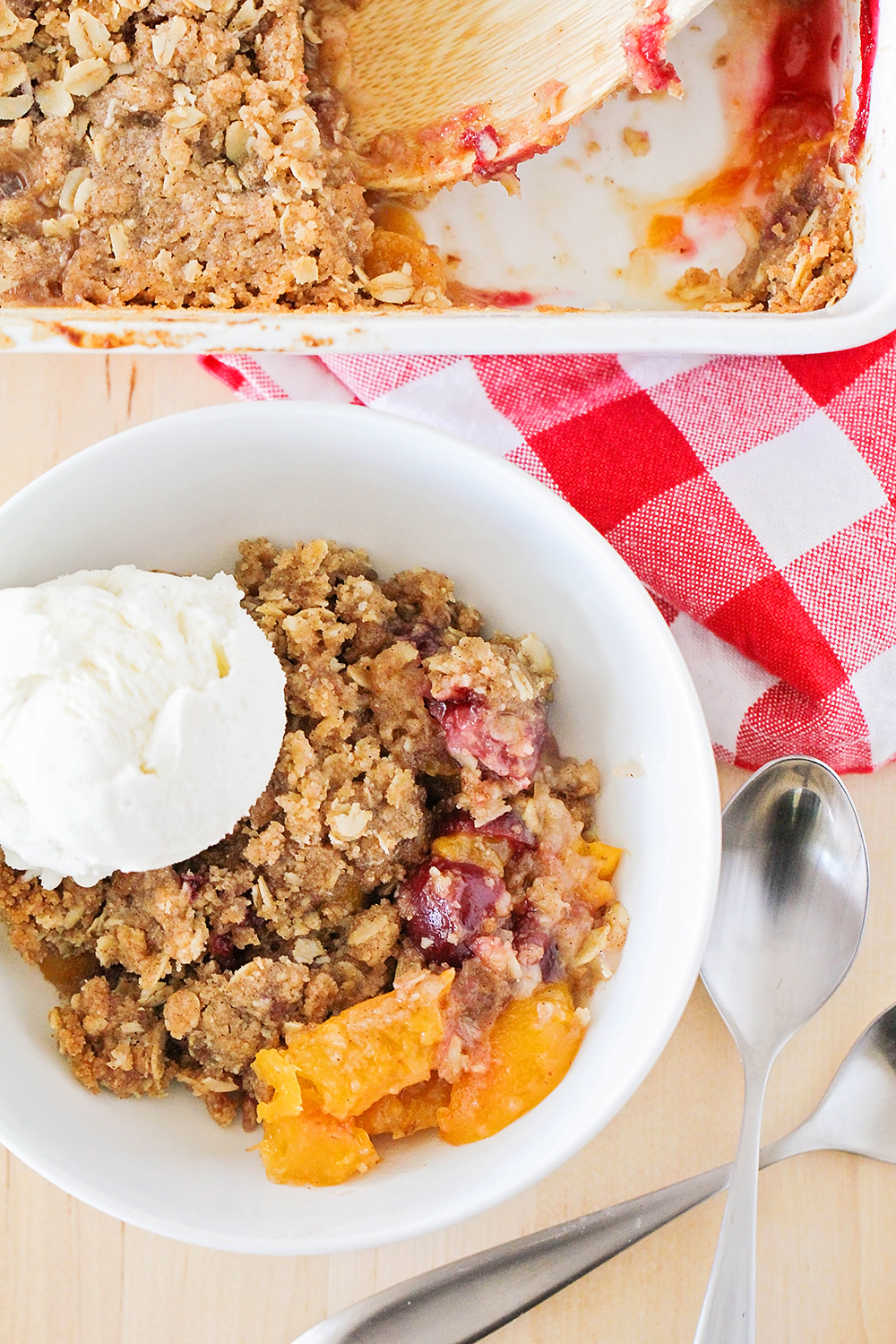 for the filling:
6 peaches, peeled and sliced
2 cups fresh cherries, pitted and cut in half
1/4 cup sugar
1/4 cup flour
pinch of salt

Preheat the oven to 350. In a medium bowl, toss together the peaches, cherries, sugar, flour, and pinch of salt. Spread the mixture in the bottom of a 9 x 9 baking dish. In another medium bowl, whisk together the oats, flour, brown sugar, cinnamon, and salt. Add the butter, and smush the mixture with your fingers until the pieces of butter are no larger than pea sized. Sprinkle the topping over the fruit to form an even layer. Bake 40-45 minutes, or until golden brown on top and bubbling. Let cool 10-15 minutes before serving. 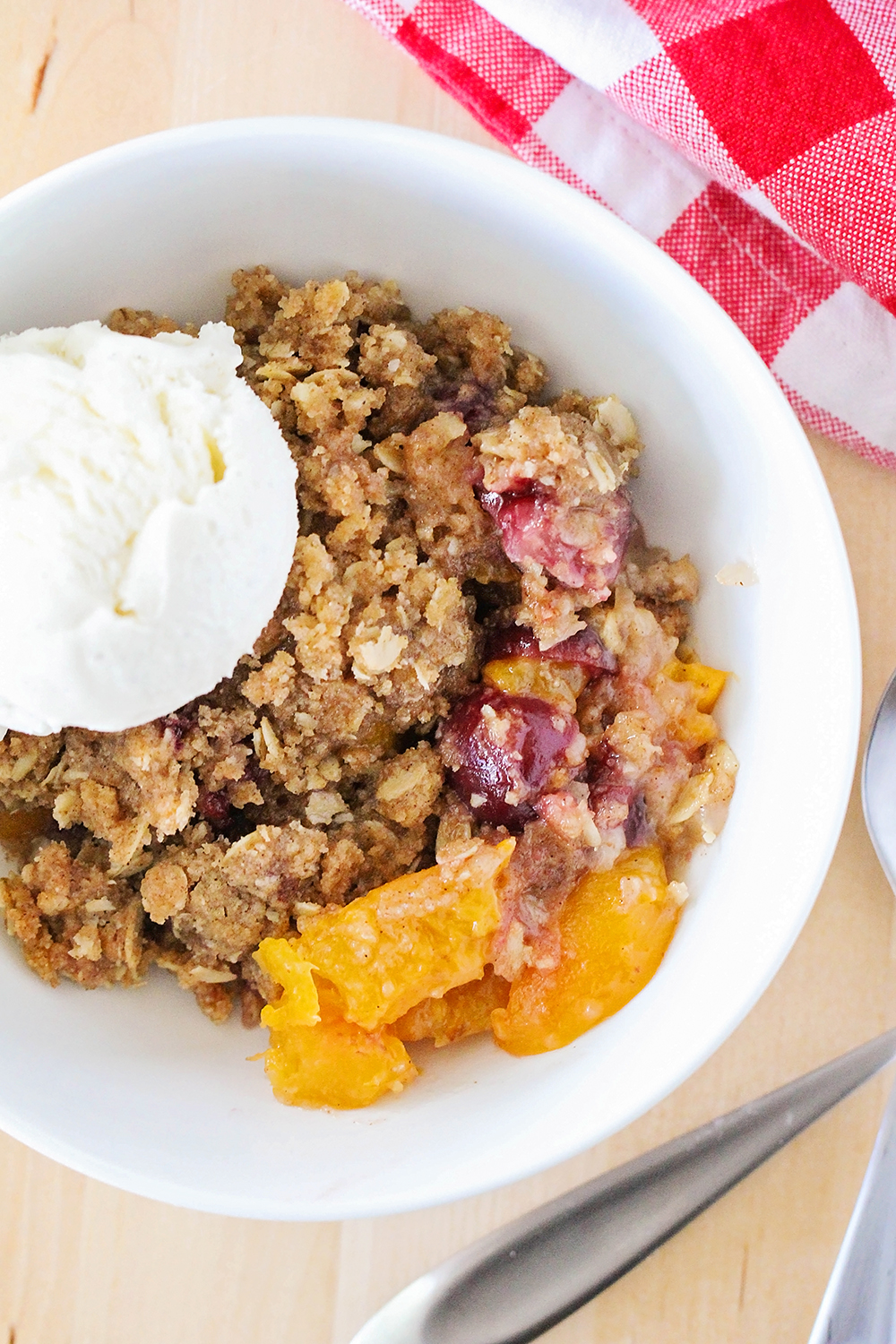 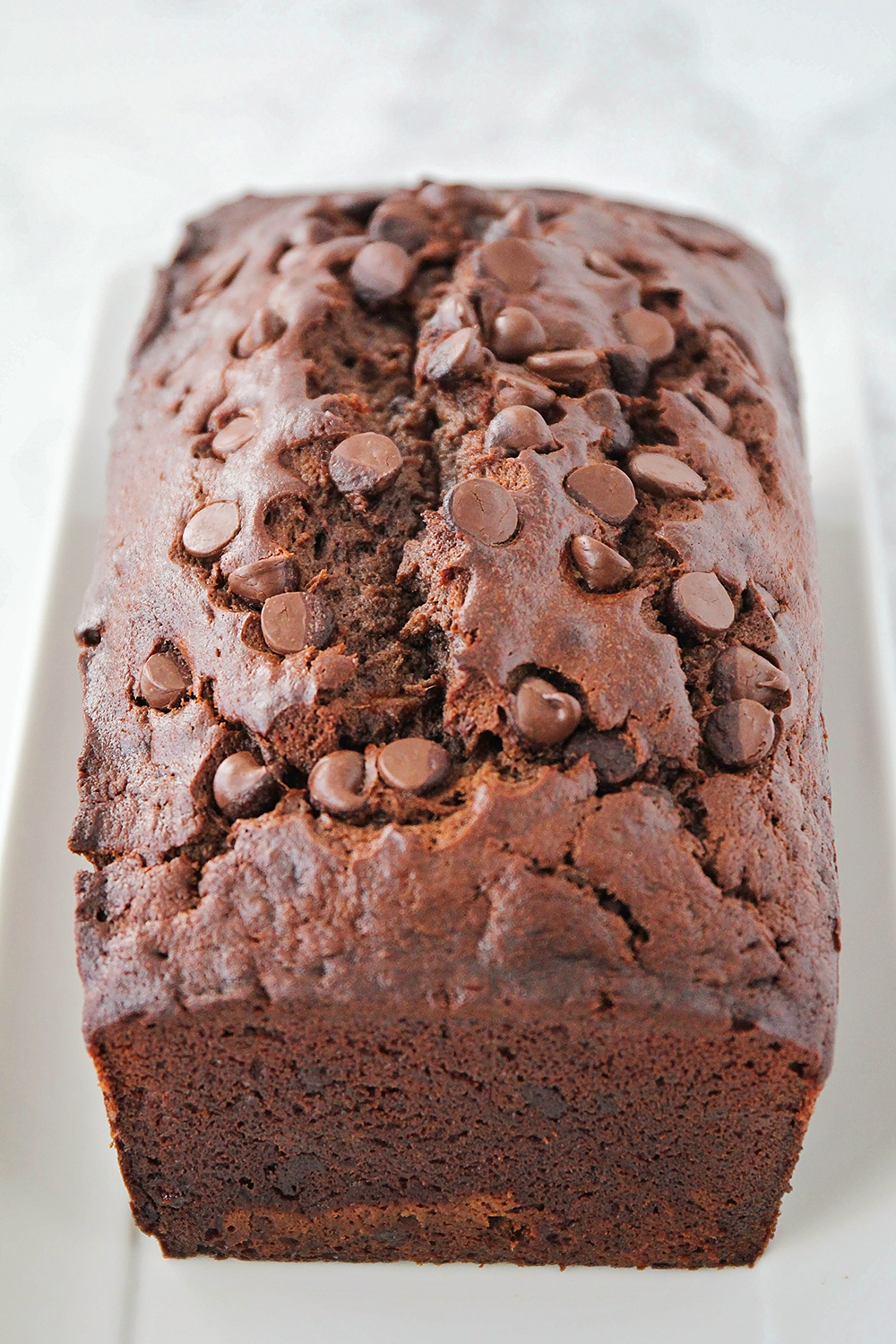 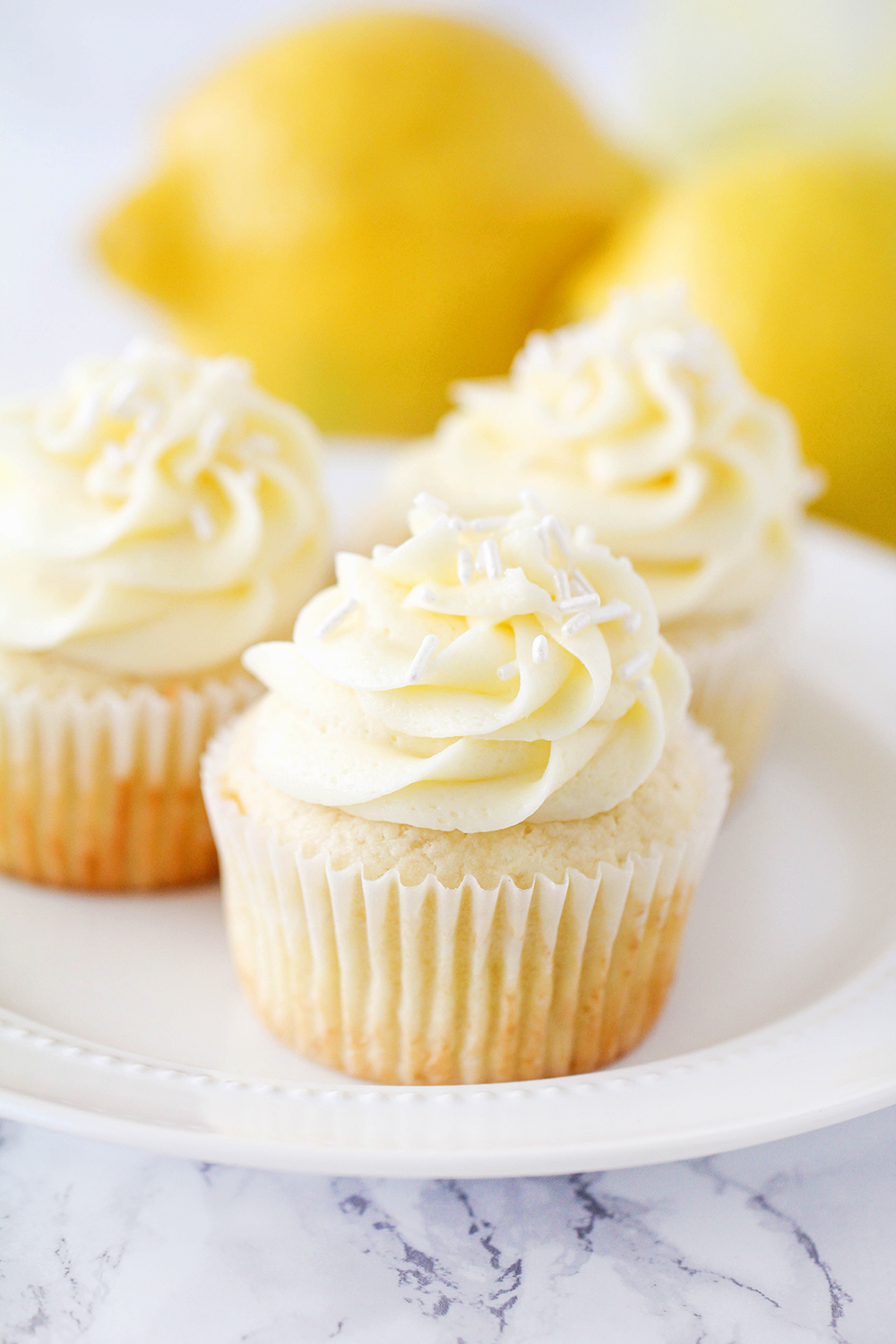 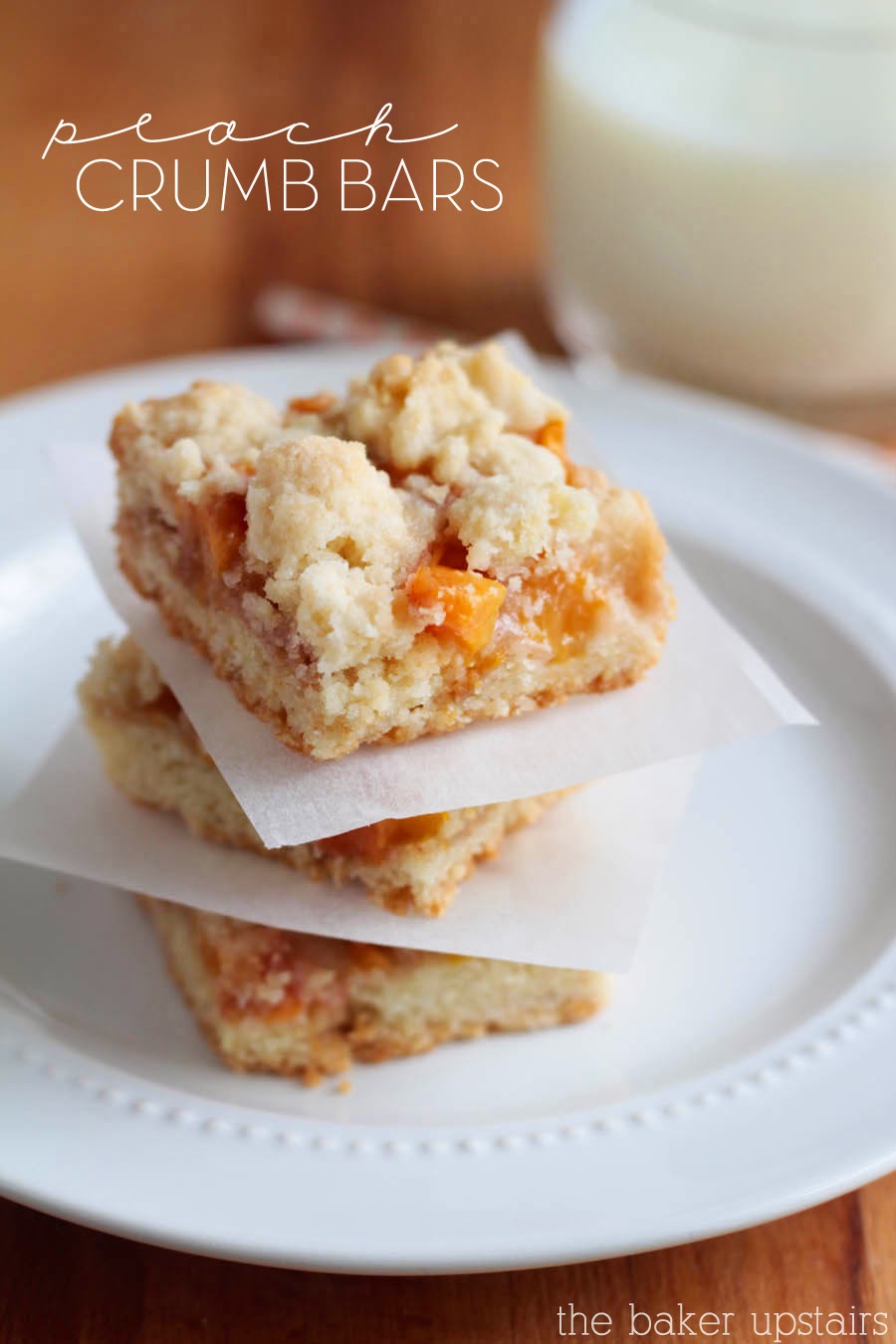